Betta Eco Foam Blocks are designed to inspire children to build,creat and play with their imagination. Safe and Fun!Using Betta Imagination Playground blocks, kids build a new world every day. They make objects like animals, rocket ships, and robots. They make imaginary places like houses, factories, and cities. They make new dramatic scenarios, settings, and games to play. Most important, they make the rules. Because Imagination Playground is child-directed and open-ended, it encourages self-expression through deep, joyful play.

-----We provide one stop solutions of children's commercial   playgrounds from design, manufacture and install. 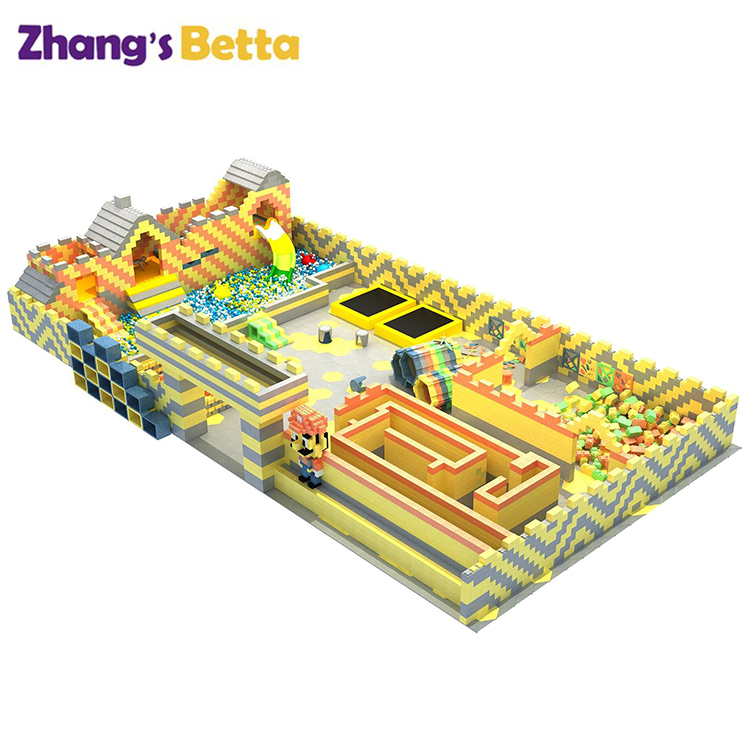 Using Betta Imagination Playground Blocks, kids build a new world every day. They make objects like animals, rocket ships, and robots. They make imaginary places like houses, factories, and cities. They make new dramatic scenarios, settings, and games to play. Most important, they make the rules. Because Betta Imagination Playground Blocks is child-directed and open-ended, it encourages self-expression through deep, joyful play.

Betta Imagination Playground Blocks are sold in sets suitable for a variety of outdoor and indoor sites, offering a cost-effective way to give children of multiple ages access to productive play.

Betta Imagination Playground Blocks is a giant leg0s . Following suggeted cases for your reference . It is better for you DIY .Showing me your case , i can give you a surpise gift .

Researchers have long known that playing with blocks helps children develop cognitive and social skills. Light weight Betta Blocks will be a brand new form of furniture, which has been designed to inspire your children to build, create, and play with their imagination.Betta Imagination Playground blocks combine all of the benefits of block play on a larger-than-life-size scale that encourages kids to play together in groups and have more fun. While 1 of every 3 other toys tested in a study of 1,500 popular children’s toys contained potentially harmful levels of lead, arsenic, mercury and other dangerous chemicals, according to findings released earlier this month by the Ecology Center, an Ann Arbor, Mich.-based consumer safety organization. Most of the toys tested positive for only one of the chemicals.

Ever wonder why some plastic goods or toys have that awful smell? This is especially the case with many rubberized plastics.

Research and testing is increasingly illustrating that these materials may not just smell bad. They may also be outgassing potent toxins and carcinogens.

Kids typically don't think about the story in a book, the rules and challenge of a game, the plot of a cartoon, or anything like that.

Kids are interested in the visual.  That's all they really care about.

Betta is made of a kind of security and environmental material which is convenient to be recycled.

Unlike toys and games,Betta Imagination Blocks Playground don’t dictate to children the way they’re meant to be played.

With Betta Imagination Playground, kids literally make their own open-ended fun. There's no right or wrong way to play with them. T/T, Our normal payment term is 30% as deposit, balance before loading.

For large order, we accept L/C.

For trial order about some play parts, we accept western union, paypal or cash.

It is based on the quantity you order. But normally, our production time is 14 work-days.

Q: Do you have the project in our country we can have a check?

A: BETTA have already many successful playground project around the world, contact us freely for the already done project case close to your home now.